The Goldfinger DB5. Just like the DB4 GT Continuation models we saw at the end of 2016, Aston is building 25 brand-new Aston Martin DB5s, built as “authentic reproductions” of the exact car that Connery, Brosnan and Craig all drove in various screen outings.

By authentic, Aston mean things like revolving numberplates “and more”. We suspect the ejector seats and oil spray probably won’t make the cut, though we live in hope.

Each will be assembled at Aston’s Newport Pagnell factory – where the original DB5 was made – and will feature “sympathetic modifications”. And it’ll come in any colour you want as long as that colour is Silver Birch. Just like in the movies.

The original car came with a 4.0-litre straight-six with 282bhp and 280lb ft of torque. If it’s the same philosophy as the DB4 GT Continuation, expect the same, only slightly tweaked for reliability. 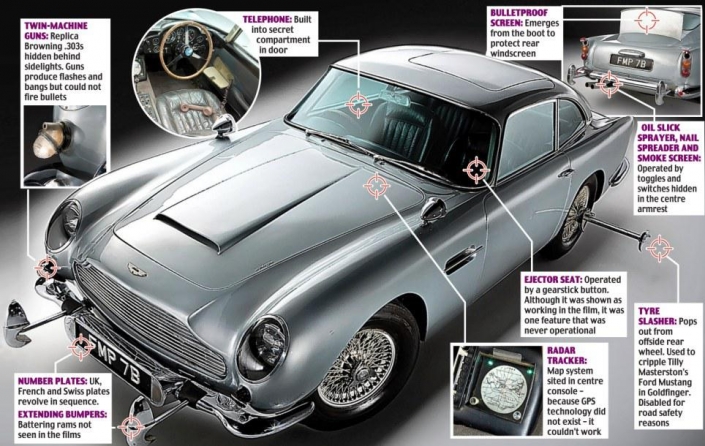 Aston will get assistance from EON Productions, the company responsible for the Bond films, and also a helping hand from Oscar winner Chris Corbould, who not only was the special effects supervisor on eight James Bond films, but also worked on Chris Nolan’s Dark Knight trilogy.

The cars will be ready for customers in the later part of 2019, though as you would expect, they’re not cheap: £3.3m (including taxes) a pop.

“The connection between Aston Martin and James Bond is something of which we are very proud,” explains Aston boss Andy Palmer. “It is remarkable that the DB5 remains the definitive James Bond car after so many years.

“To own a Silver Birch DB5, complete with gadgets and built to the highest standards in the very same factory as the original James Bond cars? That is surely the ultimate collectors’ fantasy,” he added.

Collectors’ fantasy indeed. Not one of the 25 reproductions will be road legal. Aston intends to build three more – one for EON, one for itself, and a final one that’ll be auctioned off for charity.

Whatever you do however, don’t touch the little red button…